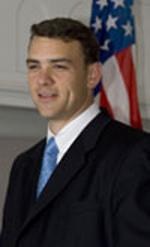 Before coming to Preston City Bible Church, David Roseland grew up in East Texas, a life-long student of categorical, exegetical Bible teaching. He graduated from the U.S. Military Academy at West Point in 1999 with a BS in electrical engineering and was commissioned as an Armor Officer.

He served for five years in the Army’s 4th Infantry Division, enjoying an unusually long tenure as a platoon leader, first with tanks and then an Infantry Mortar platoon. In April 2003 David and his mortars deployed with the 4th ID to Ba’Qubah, Iraq where he as a captain finally said goodbye to his platoon. He became a personnel officer and soon found himself paying Iraqi defense personnel their salaries, as well as dealing with local fuel apportioning among the villages and cities of theDiyala Province. David taught the Warhorse Bible Study in Ba’Qubah.

Upon returning to the U.S. in April 2004 David began to transition to civilian life as a seminary student. He graduated from Dallas Theological Seminary in May 2007 with a Masters in Theology in Bible Exposition.

David and his wife Krista were married at West Point, NY in 2001 and now live in Eastern Connecticut.