Pastor Robert B. Thieme III, a native Texan, became pastor of Berachah Church in 2004 following his father, Colonel Robert B. Thieme, Jr., who built a worldwide ministry while serving as pastor for 53 years. Prior to becoming a pastor, R. B. Thieme III had a distinguished career in the U. S. Army, serving as an Infantry officer, Airborne Ranger, and a tactical and strategical intelligence officer. He left the army as a major and enrolled in Western Conservative Baptist Seminary in Portland, Oregon. He graduated Magna Cum Laude in 1987 with Masters degrees of Divinity and Theology. Upon completion of seminary in 1988, he joined R. B. Thieme, Jr.,Bible Ministries as the editor-in-chief. He continues to serve as president of the Ministries as well as pastor of Berachah Church.
–
–
– 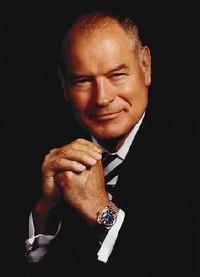 Robert B. Thieme, Jr., pastor of Berachah Church from 1950-2003 and president of R. B. Thieme, Jr., Bible Ministries, passed through death into eternity Sunday, 16 August 2009 at 8:45 PM and is now “absent from the body and face to face with the Lord” (2 Corinthians 5:8b). He was the beloved husband of Betty Beal Thieme and devoted father of Robert B. Thieme III. He is also survived by his sister, Ann T. Wallis, and his cousins, Fredericka Botts and Nancy N. Harder.

Bob was born on 1 April 1918. His father, Robert B. Thieme, and mother, Anna Cloakey Thieme, of Ft. Wayne, Indiana moved to Beverly Hills, California in 1926. Bob graduated from Beverly Hills High School in the summer of 1936, having lettered in football, track, and gymnastics. He was a member of the Beverly High Alumni Association.

With the goal of becoming a pastor, Bob was licensed to preach by the First Baptist Church of Tucson, Arizona on 5 June 1940. To further his ministerial preparation, he enrolled in Dallas Theological Seminary, Dallas, Texas in 1940. After one semester, his seminary studies were interrupted by the impending entry of the United States into World War II.

On 3 April 1941 Lieutenant Thieme began active duty service in the Army Air Corps. Because of the nature of his assigned duties he received rapid promotion and by the end of the war had attained the rank of lieutenant colonel. LTC Thieme was the Director of Military Training for Flying Training Command. In this position he was charged with initiating, prescribing, and standardizing military training for all categories of personnel in the Aviation Cadet programs. His duties included coordinating training at 120 Army Air Corps installations throughout the United States and authoring publications that standardized this training. By 1943, he had written The Military Triad, Strategy and Tactics for The Aviation Cadet, and Get Smart, Mister. His final assignment was to supervise and direct the gunnery training at Harlingen Field, Texas. Bob returned to Dallas Seminary in 1946 to resume preparation for the ministry. The academic training he received in Greek, Hebrew, theology, history, and textual criticism became the foundation for a rigorous professional life of studying and teaching the Word of God. As a student, he became the interim pastor of Reinhardt Bible Church in Dallas, Texas. Upon graduating summa cum laude with a Master of Theology in May 1949, he continued to pastor at Reinhardt until April 1950.

For fifty-three years Robert B. Thieme, Jr., was the pastor of Berachah Church in Houston, Texas. As pastor he developed an innovative system of vocabulary, illustrations, and biblical categories designed to communicate the truths of God’s Word. His scholarly, expository approach to teaching the Word of God and the worldwide distribution of his publications and biblical teachings without charge or obligation have made Pastor Robert B. Thieme, Jr., a major voice in Christianity today.